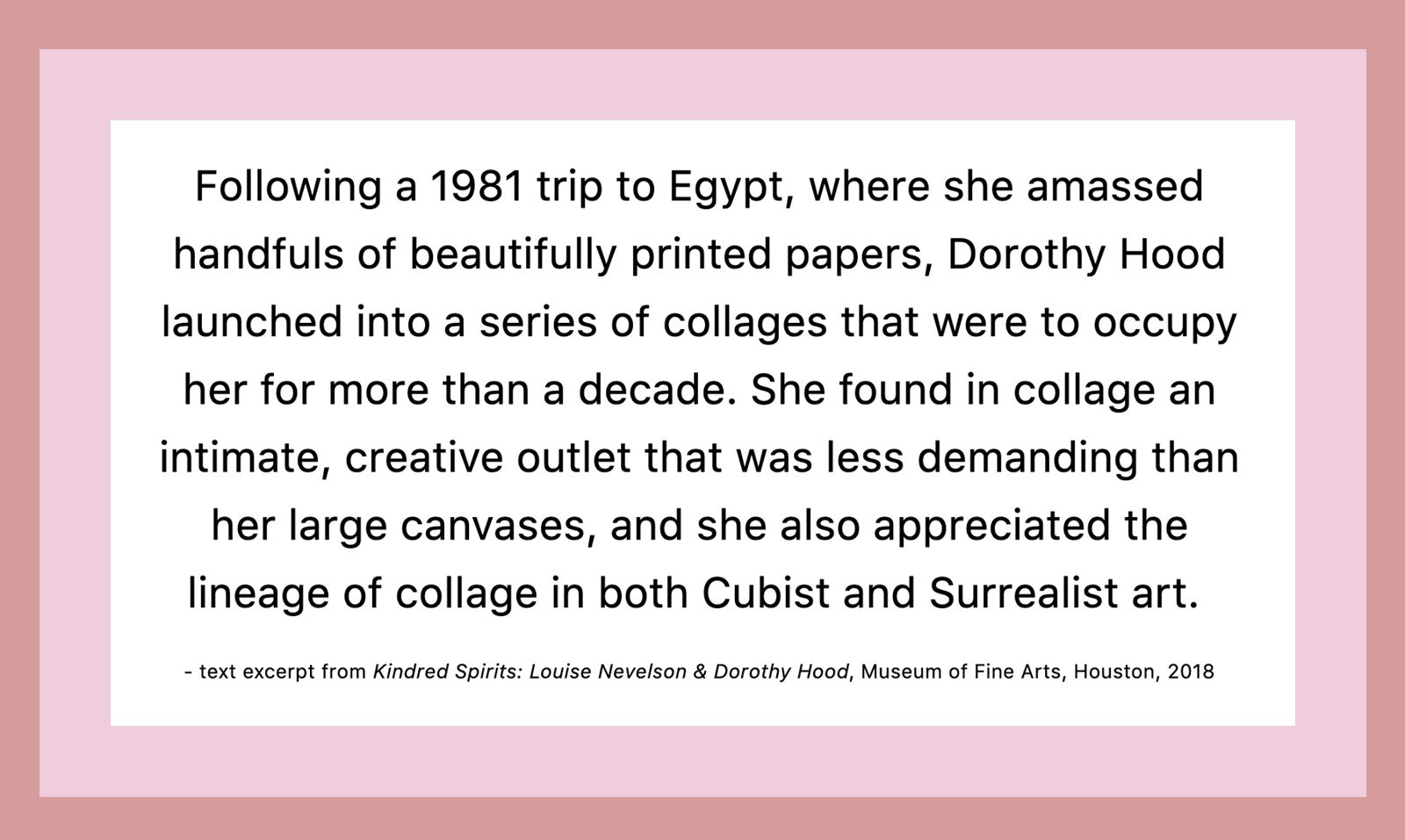 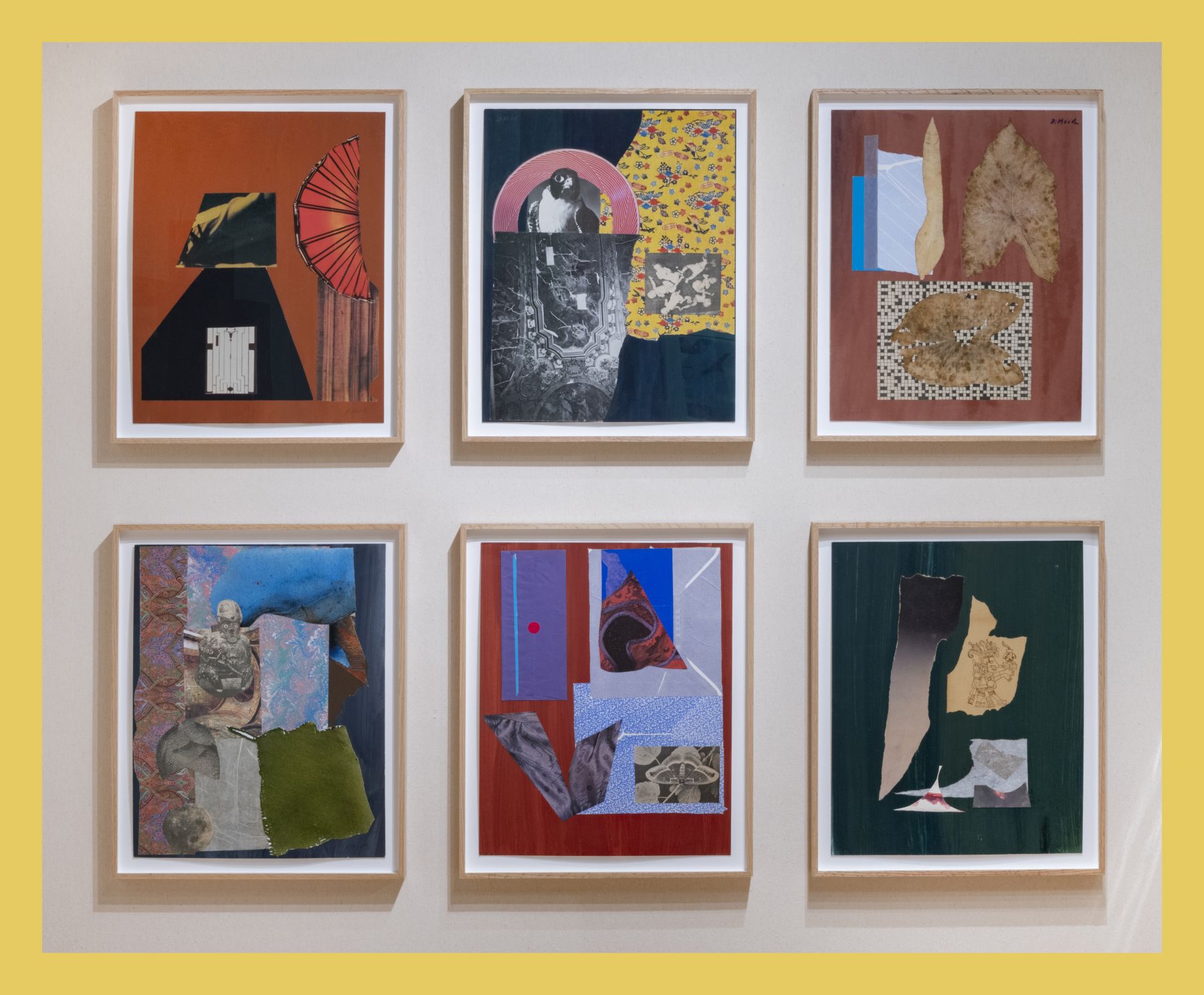 McClain Gallery is pleased to present a focused look at collages by Dorothy Hood (b. 1918, Bryan, Texas d. 2000, Houston, Texas). The pictorial space and visual fissures of her large-scale paintings and works on paper recall a profound mindscape that echoes her early Surrealist connections from her time spent in Mexico in the 1940s-1960s. Having moved back to Houston in 1962, the impact of the space age and the fathoms of the cosmos influenced Hood’s paintings further. She would start making collages in 1982, and while lesser-known, these works are rich in material experimentation and reveal a more intimate look at the artist’s process and inspirations. By focusing on an edited group of collages, this exhibition provides a closer look at Hood’s unique artistic vision and expands the understanding of her practice as a whole.

Reviewing Hood’s first exhibition of these new works in 1982, Mimi Crossley observed, “They are put together in surrealist compositions—a surrealism not made by juxtaposing images full of content, but created by placing shapes on shapes, texture against color, until a dreamlike world is born in toto.” (…) Hood’s first collages tended to be vertical, with a compositional flow that was not dissimilar to her paintings. As the series evolved, however, Hood began to insert increasingly narrative elements." 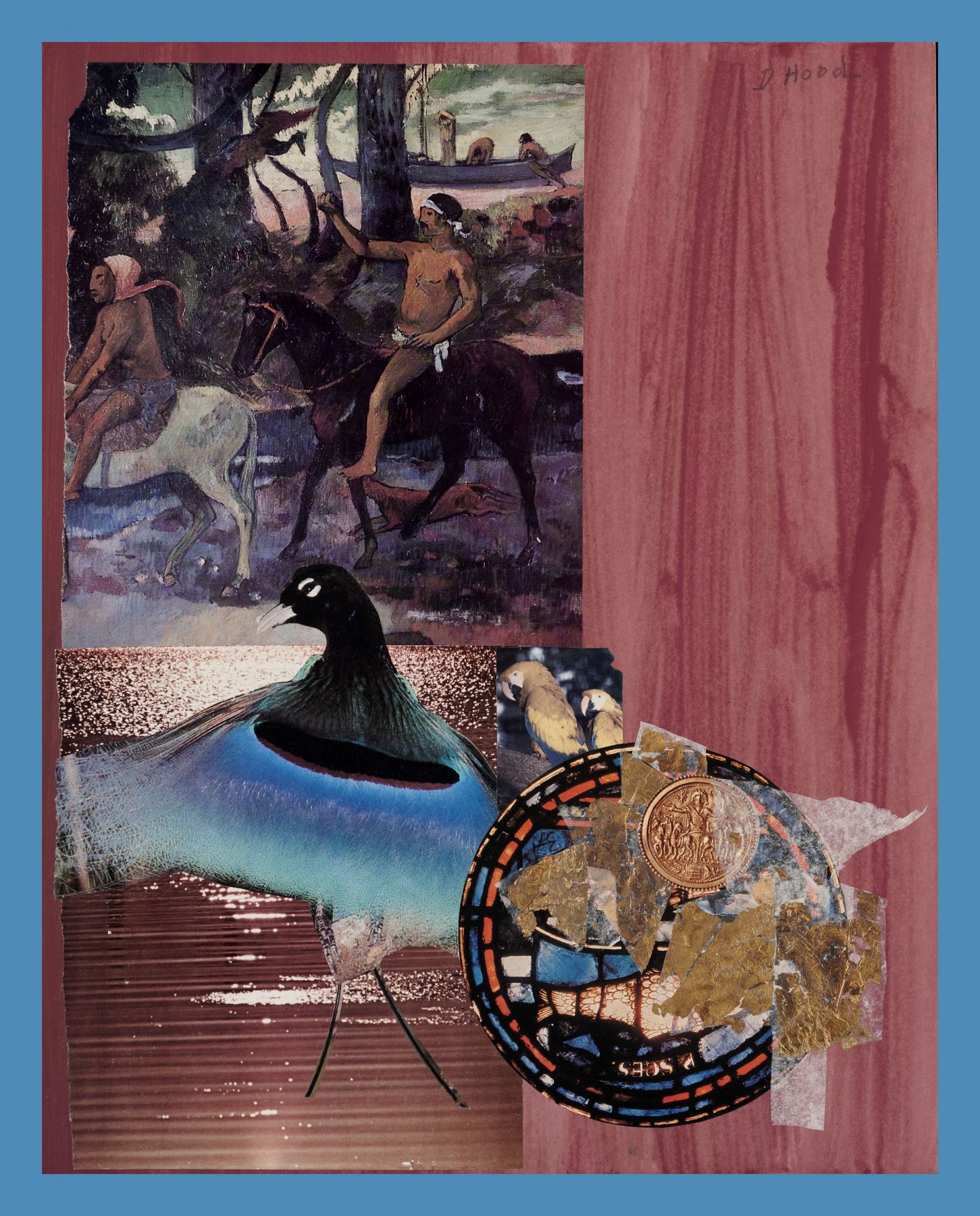 "Hood's collages demonstrate the range and depth of her quest for meaning as well as her ability to create visions from a variety of materials… The collages portray a range of disparate spaces that become metaphors for the human psyche in the late twentieth century. In a single work, she might join distant views, outer space, interiors, the flat painted space of modern art, silvered pools of mirrored reflexiveness, and theatrical curtains with the habitat of a particular animal. Though she herself is by no means a Surrealist, her collages draw on the strengths of Surrealism, which have supported her art and sanctioned her visions since her days in Mexico in the 1940s and 1950s… Hood's structuralist approach enables her to transform artistic devices into meaning. Whereas for other artists the overall tonality of a work might be merely a way to achieve unity, for Hood it is a means of conveying the underlying harmony that still exists in our fragmented world... When one looks at the interplays of reflected light in Hood's collages, one enters a new time/space dimension. The myriad reflections in her works are not mere replications of reality: they are distortions, permutations, and hybrids representing a journey into a new post-Cartesian world… [The collage work] is a combination of disparate elements that encourages great leaps in time and space: in essence, it is a new magic show." 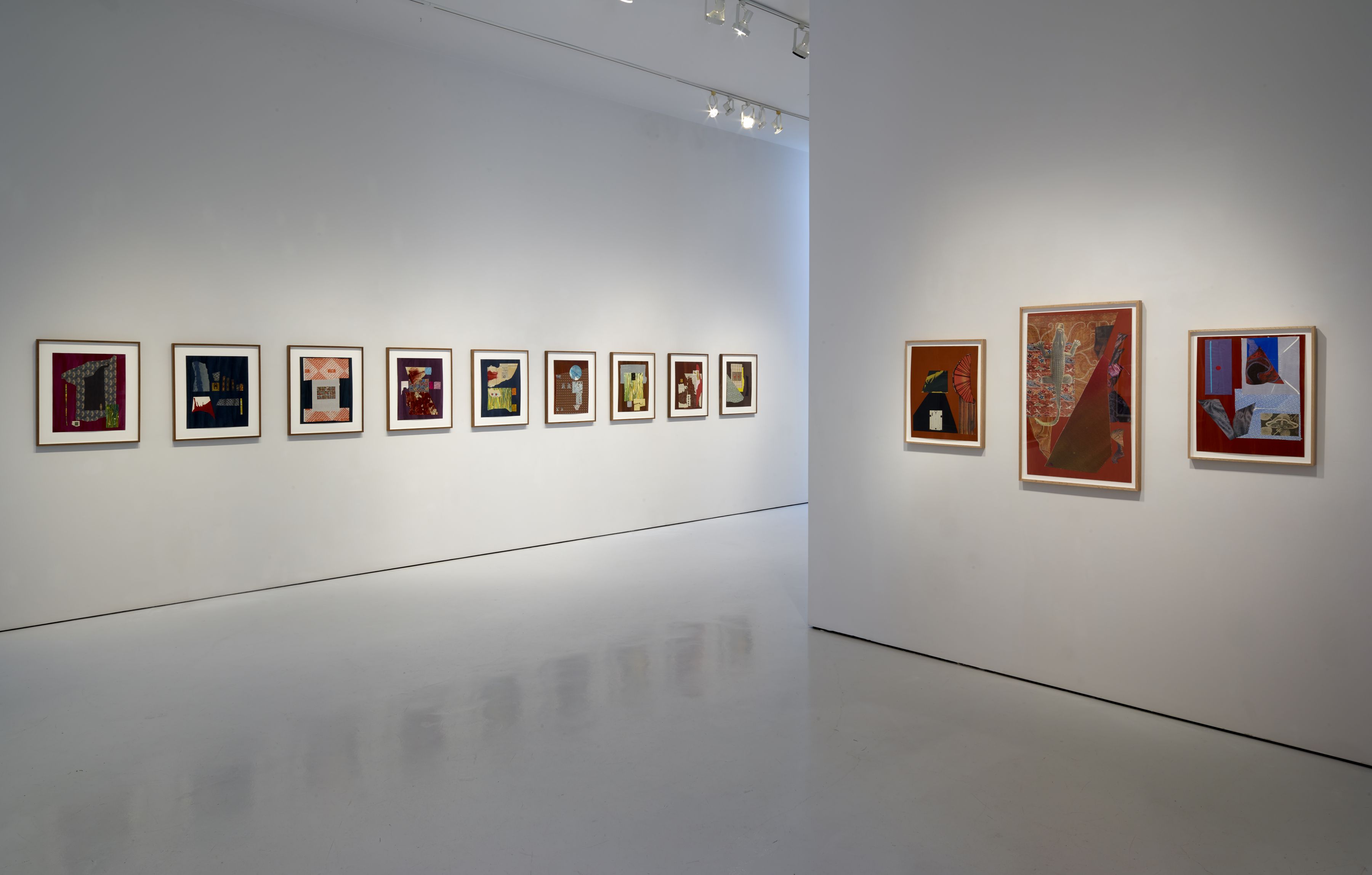 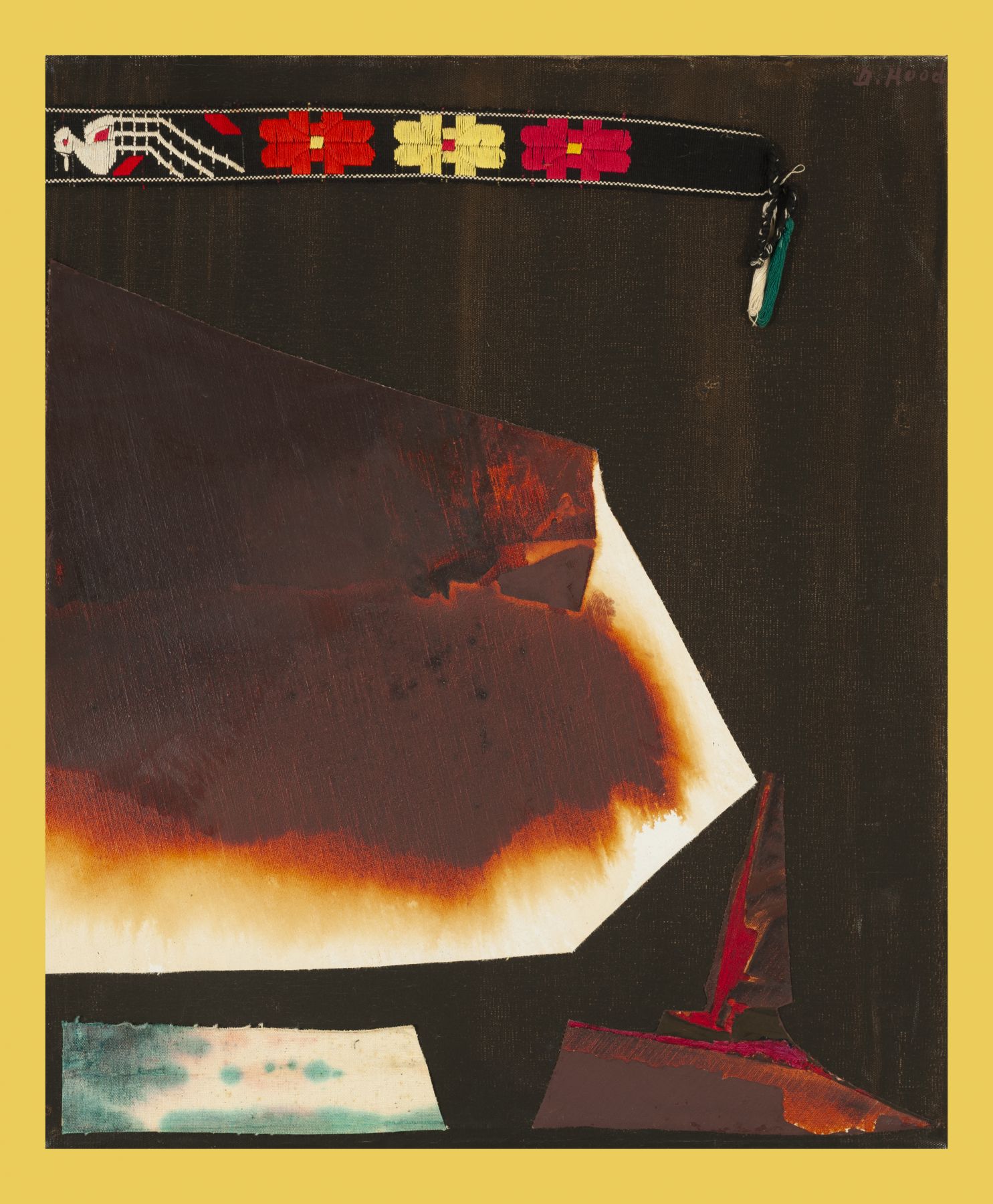 A rare, small series titled “Shards of the Earth” from the 1980s can be viewed as a bridge between her painting practice and the collages. In these paintings, Hood includes fragments of canvas cut from parts of other paintings starkly set on dark, flat backgrounds. These “shards” of canvas replicate in part the geological elements that set apart her paintings and evoke a fractured landscape, which features painterly techniques such as decalcomania and liquid pigment pours which are so paramount in her later works. The canvas fragments are combined with South American textiles in an exploration of texture, patterns, and color blocking. Aside from their textural complexity and narrative elements, the works provide an invitation to explore contemplative and imaginative worlds. The spatial expanses of the subconscious, the symbolic, and even spiritual realms echo throughout the entirety of the collage oeuvre. 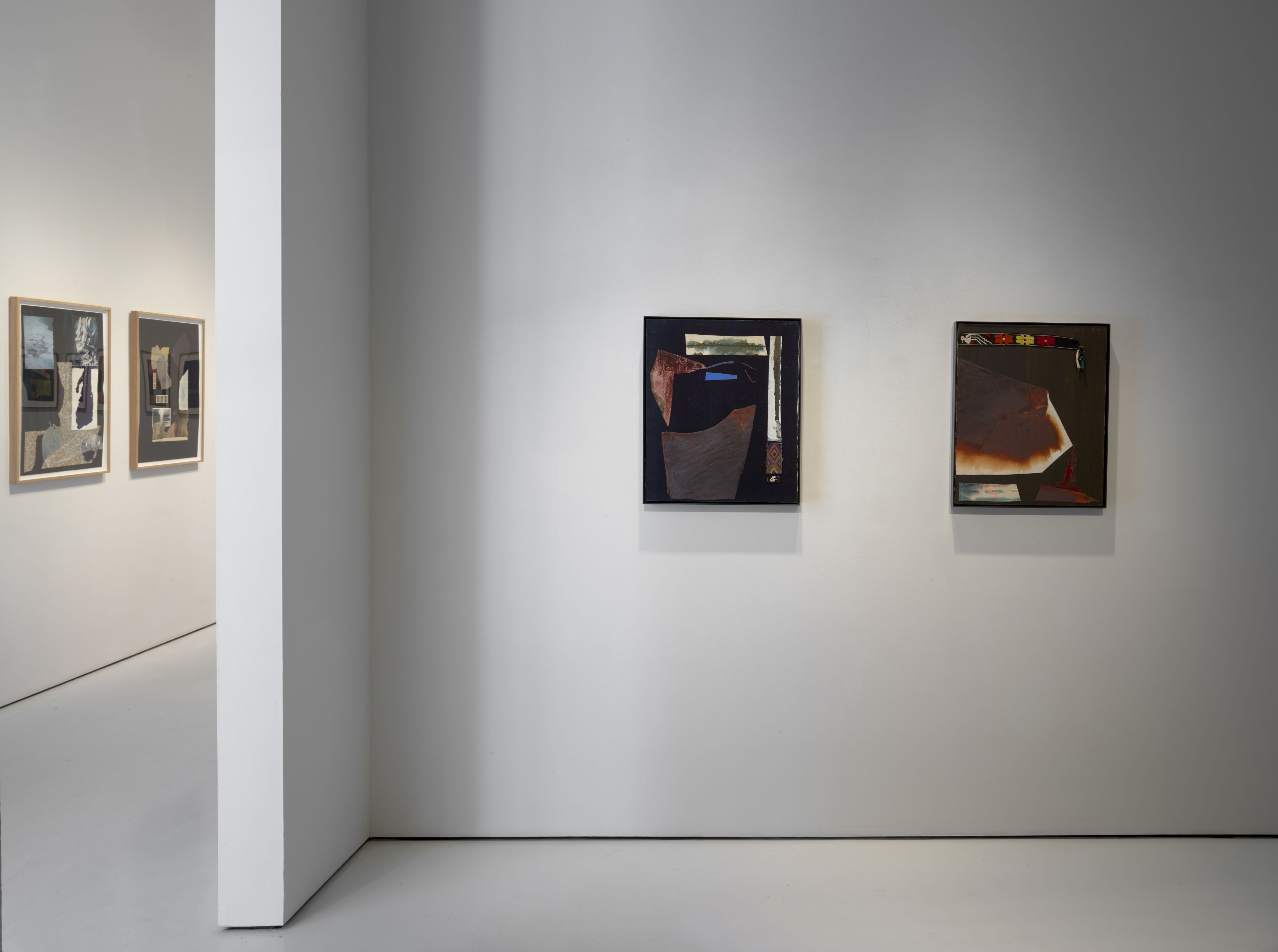 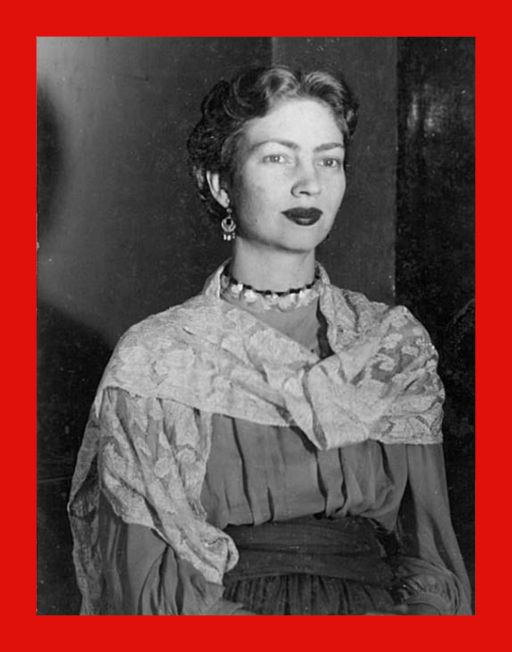 DOROTHY HOOD (b. 1918, Bryan, Texas d. 2000, Houston, Texas) established herself as a pioneer of modernism from 1937, first as a scholarship student at the Rhode Island School of Design and briefly at the Art Students League in New York City, before settling in Mexico City in the 1940s. There, she would spend two decades embedded in the rich cultural fabric of a city in the midst of post-war and post-revolutionary bohemia. She befriended leading artists and intellectuals including Pablo Neruda, José Clemente Orozco, Leonora Carrington, Remedios Varo, Mathias Goeritz, Diego Rivera, and Rufino Tamayo.

In 1962 Hood returned to Houston and had solo exhibitions at the Contemporary Arts Museum, Houston; Witte Museum, San Antonio; Rice University, Houston; Museum of Fine Arts, Houston; Everson Museum of Art, Syracuse, New York; and her work is in the permanent collections of numerous American museums. During her lifetime, Hood’s work, from her formally rigorous yet metaphysical and intimate abstract paintings, to ink drawings on paper and collages, garnered an impressive exhibition history and support from influential critics, curators, and collectors including Philippe de Montebello, Dorothy Miller, Clement Greenberg, and Barbara Rose, among others.

In 2016, the Art Museum of South Texas (AMST), Corpus Christi, organized a major retrospective of Dorothy Hood's works and published a monograph about her life and career which culminated in the exhibition and book entitled The Color of Being/El Color del Ser: DOROTHY HOOD (1918-2000). In the fall of 2018, the Museum of Fine Arts, Houston presented an exhibition entitled Kindred Spirits, Louise Nevelson & Dorothy Hood, mounting an unprecedented visual dialogue between the works of both artists. In 2019, McClain Gallery began representing the estate of the artist, held by the Art Museum of South Texas, and mounted a solo exhibition, Dorothy Hood: Illuminated Earth.